Pineda, Pine Tar And Why The Red Sox Lost

Let's get something out of the way right now. The Sox lost to the Yankees 4-1 because Michael Pineda pitched a very solid game. They lost because they went 0-5 with runners in scoring position.

They most certainly did not lose because Pineda had something on his hand.

Last night's broadcast on NESN turned into a late-night Alex Jones radio show, with Remy and Orsillo ruminating about a brown substance on Pineda's pitching hand. Was it pine tar? Was it dirt? It really doesn't matter, because unless Pineda has been pitching every game in every series in 2014 then Boston's problems go beyond last night's loss. 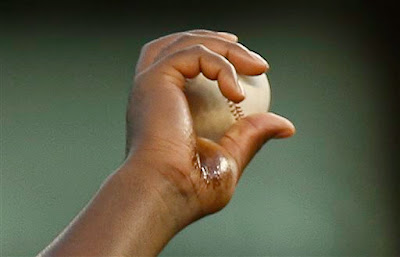 The hand that somehow makes Daniel Nava keep striking out.

Add to the above the fact that their fielding has been below league average so far in 2014. The AL team average is a .984 fielding percentage with five errors. Boston has a .979 FP with eight errors.

A number of those factors came together last night. 0-5 RISP. Six strikeouts and no walks. One run scored. And a critical error that led to two New York runs. That is why Boston lost last night. It wasn't a brown stain on Pineda's hand.

It wasted a good performance from Buchholz. He did surrender a home run. But six innings, seven hits , six strikeouts and no walks is not a bad outing. But when your teams only musters four hits...you aren't going to win.

There is also the issue with Daniel Nava. Yes, he did hit the home run last night. But he also struck out three times. Those 82 strikeouts Boston has so far? Nava owns 10 of them by himself. He has a .139 batting average and a .455 OPS. I hate saying things like this, but Nava is dragging down a lineup that doesn't need any more problems.

One bright spot yesterday was the continuing improvement of Jackie Bradley. After a very rough start to 2014, he is hitting .364 with a .917 OPS. Of course, that is likely not where he will stay. But in his first five games he didn't walk at all and struck out five times. In his last four games he has struck out three times and walked four times. That is a strong turnaround and hopefully it will continue.

Admittedly, all this angst has to be put in some perspective. We are just 10 games into the 2014 season and Boston is one game out of first...and three teams are tied for first at 5-5. But we as fans, or announcers, don't do ourselves any favors by trying to find external factors for internal issues. Boston just isn't hitting well right now. When we start trying to find excuses for that, we look no better than the Toronto fans who thought Buchholz was doctoring his pitches in 2013. Do we really want to be the same as Blue Jays fans?