I am thankful I was so busy this weekend that I didn't have time to type about Boston's series with the Brewers until today. Because had I done it in the moment it likely would have been a ton of cursing briefly interrupted with sobs.

Dropping the home opener was something I actually expected. Coming off the emotion of the ring ceremony and raising the title banner, you can see that being a possibility. What I didn't expect was it to happen via the bullpen imploding in the ninth inning.

Edward Mujica simply didn't have the stuff he needed to get three outs. Only one batter went to four pitches, when Carlos Gomez hit a 2-1 pitch to drive in Overbay and increase Milwaukee's lead to 5-2. By the time the Sox brought Andrew Miller in, it was 6-2 and the game was effectively over.

It also didn't help that the Sox lineup only scratched four hits and two runs off of Estrada despite getting him to throw 102 pitches in 5.2 innings. It was a waste of a solid performance from Jake Peavy, who went six innings and gave up two runs on six hits. But the Sox went 0-6 with runners in scoring position. 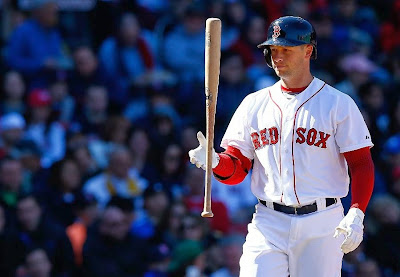 They may as well have held their bats like this the entire series. Jared Wickerham | Getty Images


Game Two was a runfest that Boston had no business winning. Buchholz was bad, going 4.1 innings and gave up six runs on 13 hits. The Brewers' Wily Peralta was little better, with Boston scoring five runs in five innings.

Boston's bats were quiet; only Napoli and Bogaerts had more than one hit. One-third of the lineup never even got on base. You can't win games like that.

And then came the series finale, a 4-0 shutout where Yovani Gallardo showed a remarkable amount of control, going 6.2 innings allowing seven hits and no walks. And even though the Sox got him off the mound in the seventh inning, they couldn't even scratch a single run off of Milwaukee's pen.

One bright spot was that every Boston starting batter got a hit. Literally, one hit a piece. I can't remember the last time I saw that. The problem is that they couldn't string any of them together. The only guy to get a hit with a runner in scoring position was David Ross in the seventh with a two-out hit that got Jackie Bradley to third base. But then Nava flied out and that was that.

It was a waste of another solid outing from Jon Lester. He went 7.1 innings and gave up seven hits. He was also only responsible for two of the four runs thanks to two errors. He struck out six and walked one. I hope this lack of run support doesn't become a regular event for Lester.

In looking across this series you see a couple of problems, those being two batters. Daniel Nava and AJ Pierzynski aren't hitting a damn thing. Nava has an OPS of .302; that would be the worst on most teams.

It's not like other people aren't struggling (Gomes and Bradley are low as well) but Nava and Pierzynski are standing out. Nava especially as he has been the leadoff batter. When your leadoff batter goes 0-5 or 1-4 and isn't even drawing walks to get on base, you are going to have trouble. When your catcher sees less than 20 pitches across two games and swings at everything within a mile radius of home plate, you are going to have trouble.

Granted, it is still very early in the season. But this is something that Farrell needs to start monitoring (though he is likely well aware already). You can't have a leadoff batter never getting on base and you can't have one guy ignoring the team concept of working the count.

This isn't going to get any easier. Boston starts a home series with the Rangers tonight. A bright spot is that Boston will miss Yu Darvish. But Texas can hit the ball and if Boston doesn't start getting runs on the board, it will be another long series.
Posted by Dave at 6:44 PM