The Baltimore Orioles were the only AL East team to have a winning record against Boston last year. The Sox were 8-11 against the Orioles with a .421 winning percentage. That was their third lowest win percentage against any team last year.* 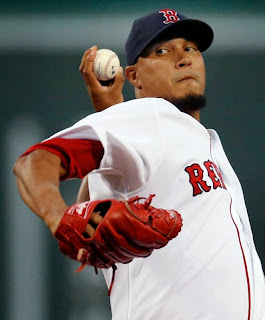 One series, especially the first of the year, cannot be a barometer for the season as a whole. Just as one game doesn't define a series or a trend. But with Boston's 4-3 win last night, they start the season 2-1 against a team that gave them fits in 2013. And across those three games, you could see some commonalities.

Let's look at last night's starter first. Felix Doubront picked up the win with a performance that, although it wasn't a quality start, nevertheless got Felix his first win of 2014. He went 5.2 innings, giving up three runs on six hits. He struck out four and walked one.
And now here's a look at our first commonality with Boston's starters:

All three starters were pounding the strike zone in this series, Lackey in particular. That is how you help your team wins games as a pitcher.

This control also reflects itself in the number of walks issued. Each starter walked only one batter. If you extend this to all the pitchers Boston used, the Orioles got only four walks in the entire series. That is a phenomenal job by the Boston staff.

Doubront gave up three runs, the most of any Boston starter. But against a powerful lineup like the Orioles, that is a great job. Across the series, Boston held the Orioles to only seven runs. And their bullpen allowed no runs at all.

Someone else who impressed last night was rookie Xander Bogaerts. He went 3-4 last night with two runs scored. Across all three games he was 5-9 with one strikeout and three walks. He showed a lot of patience at the plate, not chasing balls and making the pitcher work. Which brings us to our second commonality.

Boston's batters made Baltimore's pitchers work. Especially against Tillman in the season opener. But even in Game Two, Baltimore was averaging almost 17 pitches thrown per inning. Their game average was 155 pitches per game. The Orioles, on the other hand, made Boston's pitchers throw an average of 126 pitches per game. That is a difference of 29 pitches, almost two innings worth of work. That's a big deal.

It was also good to see Middlebrooks get going after an 0-7 start in the first two games. 2-4 with a walk and a run scored. Hopefully he can carry that forward. And Jackie Bradley joined him with a near identical line, 2-4 with a run scored and an RBI.

It's important to not let yourself get caught up in one game as somehow defining a season. If you did that in the opener, you thought Big Papi was going to be a massive disappointment. By the end of last night's game, he has a 1.082 OPS with three RBI and a home run. Which also isn't likely going to be where he ends up.

But looking across a few games you can start to see a trend or two. And right now Boston is doing two things they need to do to win: making opposing pitchers work and having their pitchers pound the strike zone. You do both of those things, you're going to win.

And now it's on to Opening Day at Fenway against the Brewers. 2:05 this afternoon with Jake Peavy taking the mound. But there may be some other stuff happening first. I think rings are involved and there's a banner of some kind being unveiled. I think it has something to do with this: 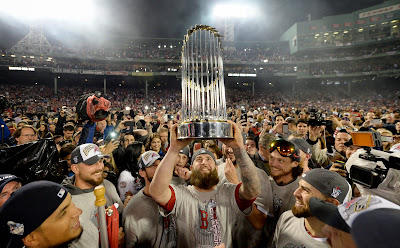 This never gets old.

* The only teams Boston did worse against were the Rangers and, surprisingly, the Royals.
Posted by Dave at 10:27 AM