Going into yesterday's game against the Orioles, I said the Red Sox had to do two things: limit Baltimore's power and not waste their scoring opportunities. A brief lapse in the former and doing the opposite of the latter is why the Sox lost 2-1 yesterday afternoon to the Orioles.

Let's talk about the good first, because that is always more enjoyable. Even with the surrendered home run to Nelson Cruz in the seventh and getting the loss, Jon Lester pitched a solid game. It was a quality start, going seven innings and giving up just two runs on six hits. He struck out eight and walked just one. It was the kind of performance that will almost always get you a win. Except when you have no run support. The relief pitching was solid as well. Junichi Tazawa threw a solid inning with no hits and one strikeout. Overall Boston had a pretty good day on the mound. 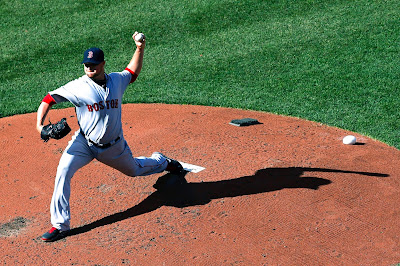 Lester was solid on the mound - (AP Photo/Patrick Semansky)


The fielding was solid as well. No errors and two turned double plays. And Grady Sizemore continued the feel-good story of the season by going 2-4 with a home run.

Now to the not-so great stuff.

Boston's batters did one thing well; they worked Chris Tillman and knocked him out of the game early. Tillman threw 104 pitches in just five innings, giving up seven hits and one run. Considering all the trouble he gave Boston last year, getting Tillman off the mound was the perfect set-up for a Boston win.

The reason they lost can be summed up in three words: zero for ten. The Red Sox went 0-10 with runners in scoring position, which is wasteful on a grand scale. Even converting just two of those runners would have given Boston the win. It was a waste of runs and of a solid pitching performance from Lester. A.J. Pierzynski was the worst in this area, stranding three runners in scoring position.

There was also a critical period where Boston batters stopped working the count. Zac Britton threw just 21 pitches in the sixth and seventh inning combined in relief of Tillman. In every other inning of the game Boston was averaging 20 pitches an inning or over. Will Middlebrooks, with two outs and a runner on third in the sixth, grounded out on the first pitch he saw to end the inning. But the worst was in the seventh when Nava, Pedroia and Ortiz went down on just eight pitches. All three grounded out when they were ahead in the count.

It was a frustrating loss because in most aspects of the game, Boston played well enough to win. Especially Lester; he pitched really well against a team that caused him no small amount of trouble last year. Watching that kind of outing being wasted with silent bats is maddening. The good thing is that this power outage is unlikely to be a season-long problem. If the pitching keeps up like this then this loss will be quickly forgotten.

The Sox have the day off, which they will spend visiting the White House to get their official congratulations for winning the 2013 title. And then it's back to work tomorrow, with John Lackey facing off against Ubaldo Jimenez. Boston saw Jimenez once last year and beat him silly, scoring seven runs on seven hits and chasing him off after 1.2 innings in a 7-2 win over the Indians. Here's hoping that continues on Wednesday.
Posted by Dave at 9:29 AM