Finally, the 2014 season is upon us. The real 2014 season, because who cares about the Dodgers.

The Red Sox are getting no favors to kick their title defense off this year. Baltimore gave them fits last year. They were the only AL East side to have a winning record against Boston, going 11-8. The Orioles have some solid pitching and a lineup that can mash the ball. To beat the Orioles you have to limit their power and not waste scoring chances. This isn't like playing Houston; leaving men on base against the Orioles is hard to overcome. 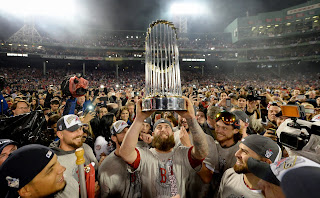 Yeah, this game isn't going to be easy.

The Sox are putting Jon Lester on the mound. The default "ace"* of the rotation, he saw a return to form last year going 15-8 with a 3.75 ERA. But against Baltimore he, like the Sox, struggled. In four starts against the Orioles Lester was 1-2 with a 4.70 ERA and a 1.478 WHIP. As well as Lester pitches against Toronto, that is how much trouble he has with Baltimore.

Both teams will likely be missing a major bat as well. Shane Victorino is on the DL with a bad hamstring, which gives right field and the leadoff spot to Daniel Nava. Baltimore may be missing Nick Markakis, whose neck has been giving him trouble.

Grady Sizemore, playing in his first competitive game in over two years, will be starting in center and batting sixth. All eyes will be on him to see how he performs. Those eyes will also be watching the young duo of Xander Bogaerts and Will Middlebrooks, batting seventh and ninth respectively. If they can swing the bat with any consistency this year, Boston's lineup will be downright deadly.

Last year the Sox kicked off 2013 with an 8-2 thumping of the Yankees. That is unlikely to happen this afternoon. The Sox have the ability to win, but playing a Baltimore team that had their number last year and facing the pitcher that helped that happen will make getting that win a challenge.