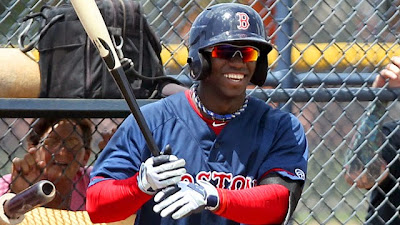 As large as the gap was between Boston and New York at shortstop, in some ways the difference between the two teams in right feels even more pronounced. Boston will have a player in his prime with the potential for a breakout season. The Yankees have a player who most likely saw his last appearance as an effective player in 2013.

Now before we go any further, two things to note about Castillo. For most of pre-season the projection was Mookie Betts in center and Castillo in right. Some websites are now switching them. I don't think this makes much sense; Betts has been playing at center in Spring Training and was playing a lot of center in the minors last year. To now start him in right just doesn't sound right. So I am keeping them where they are.

Second, technically Shane Victorino is the starting right-fielder. But he is not 100% and if you look at how Castillo has played and the things John Farrell has been saying...the Sox are looking for a way to move Victorino to the side and start Castillo. They will never say that. But that's what will happen.

It will happen because Castillo brings a solid glove and hot bat to the game. The Sox would be insane to not start him. He, like Betts, has the quality to be Rookie of the Year. More than a few writers have picked Castillo to do just that.

Meanwhile, New York is now in Year Two of a three-year, $45M deal they willingly gave a 37-year-old outfielder. Last year, $15M got them -.2 WAR. This year the Yanks will do slightly better. But like Stephen Drew, Beltran actually sucks value out of his team. His range in the field is practically non-existent. He struggles to get on base. Frankly, the Yankees would be better off playing Garrett Jones. But hey, I'm not the manager.

Could this situation reverse itself? Possibly...if Beltran was magically 100% healthy and gave the Yankees a 2013-type season, while the wheels fell off of Castillo, the Yanks would be doing fine by their standards. But the odds of that are not good.

The real problem on Boston's side could be having too many outfielders. Not only is Victorino an issue, but Jackie Bradley, Jr. is hitting the ball extremely well in Spring Training. If he could carry that over to the regular season, the Sox would actually have a dilemma on their hands. Because Bradley's glove is the best Boston has in the outfield. It's not even a debate.

So how do you fit Ramirez, Betts, Castillo and JBJ in three spots? It's not a bad problem to have, to be sure. But you never know how that can affect chemistry.
Posted by Dave at 12:11 PM