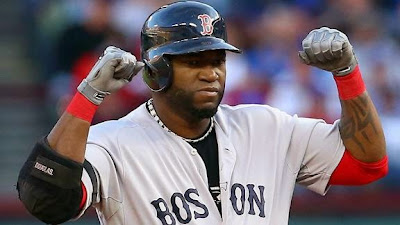 If there is one thing Boston and New York have in common, it's that the DH position is the most "controversial" position for both teams. Both David Ortiz and Alex Rodriguez have been controversial in their interactions with the media on a variety of topics, Ortiz most recently with his ill-considered article at Derek Jeter's new website.

But this is (mostly) about what these two can do at the plate, so let's look at the projections.

Now, while I do believe that Ortiz is going to be more productive that A-Rod, and for better value, I do believe this is an instance where ZiPS may stumble in projecting a player's production. And that is due to the unique circumstances surrounding A-Rod's lack of a 2014 season.

If you remember, ZiPS essentially uses weighted averages of four years of data, or three years if a player is very old or very young. So A-Rod lost all of 2014 due to suspension, not injury. And he did lose most of 2011 and 2013 to injury. So that creates a very negative picture of what A-Rod could accomplish in 2015. One that is likely too negative.

I mean, does anyone believe that A-Rod is really going to hit .229 with a .312 OBP? Those are numbers he has never sunk to since his first full season in 1996. And even though he is approaching 40 and Yankee management wants nothing to do with him, I have to believe that A-Rod will give the Yankees more that what is shown above.

But Ortiz will give more. His production has been remarkably steady and, with the exception of 2012, he has been pretty healthy. With an improved lineup around him, Ortiz should be able to continue giving the Sox good production at DH depsite being 39.

There is also the spectre of the Hall of Fame driving Ortiz. This is not to get into the debate about testing that has swirled around Ortiz as of late, but just looking at the numbers. He could reach 500 home runs this year. In two years he could reach 2500 hits and 600 doubles. He has already passed 1500 RBI. Were he to reach those numbers, he would feel that he should be in the Hall of Fame. Based on those numbers alone, he'd be right. So that is going to drive Ortiz this year.

But if there is one thing that both teams will share this year, it is that their respective designated hitters will be getting a lot of press in 2015.
Posted by Dave at 8:20 AM

Both players are "controversial" because of their ties to anabolic steroids. If the New York Yankees wanted nothing to do with A Rod, he wouldn't be in the lineup. He fills a DH void that was open but no one else on that team was going to give the team as much production at the DH position as A Rod.