Takeaways From Opening Day for Boston and New York 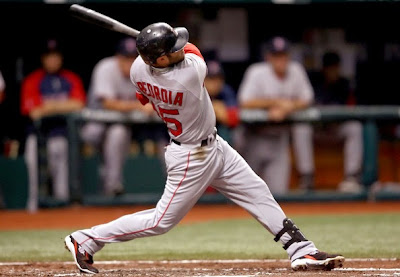 So Opening Day is in the books, with Boston getting a win in Philly while the Yanks fell to the Blue Jays. So did we learn anything at all from the games?

1. Dustin Pedroia is healthy.
Pedroia is always solid in the field, to the point that his defensive excellence can mitigate poor performance at the plate. But over the past couple of years his thumb has given him no small amount of grief when it comes to hitting. Going into this year he said he was 100% and after going 3-5 with two home runs, I am inclined to believe him.

Pedroia was turning on the ball and generating power in a way he simply wasn't able to in the past two years. If he can keep this up, Boston's lineup is even more dangerous when firing on all cylinders.

2. Masahiro Tanaka needs Tommy John surgery.
If you spend $20M for the right to sign a pitcher and give him $155M over seven years, shouldn't you do everything possible to protect that investment?

Apparently, not if you are the New York Yankees. They let Tanaka basically talk them into letting him finish 2014 and go the off-season without getting TJ surgery for his elbow. The wisdom of that move was on display Monday, when Tanaka had no fastball to speak of and could only go four innings.

Tanaka is not a finesse pitcher. But with a fastball that is barely touching 90 because of his elbow, that is who Tanaka is trying to be right now. And it isn't going to work. Sooner or later, the Yankees will have to acknowledge this and shut Tanaka down. Either way, the Yankee rotation is even more uncertain today than it was before Monday.

3. About that Boston lineup...
With the power display on Monday, it was easy to ignore/miss the fact that Ortiz and Sandoval went a combined 0-9 with six strikeouts. Or that Boston generated all their runs with home runs as opposed to hits.

I know it's one game and this smacks of the kind of despair and foolishness that sports radio is famous for throwing out over the airwaves. But Boston had massive problems with run production in 2014. No team can count on home runs to create all their scoring game after game. And Boston cannot afford to have both Ortiz and Sandoval go into massive slumps to start the year.

Rather than call this a problem, let's just say it's something to keep an eye on and we can revisit it a week or two down the road.

4. A-Rod is needed by the Yanks
This could also change in a couple of weeks. But when your lead-off batter goes 0-4 and sees 12 pitches all game, and you have four players in all fail to get a hit or even get on base, you take production where you can find it.

A-Rod didn't score any runs or drive any in, but he went 1-2 with a walk and had the best game of any New York hitter not named Brett Gardner. Being able to focus only on hitting could be a boon for A-Rod. But right now he is the best hitter New York has. Management must be thrilled...

5. A strong start for Boston's pitching staff
When Buchholz bobbled that ball in the first inning, I think it is fair to say a lot of Boston fans went "Here we go." I know I did. That is how little faith most Boston fans had in Buchholz going into 2015.

Well, for at least one game we were all wrong. Seven innings, three hits, nine strikeouts and no runs allowed. Buchholz pitched a wonderful game. And the bullpen did a fine job as well, with Tazawa and free-agent signing Tommy Layne combining to close the game out.

What every Boston fan is hoping for is Buchholz returning to his 2013 form, minus the season-ending injury. That year he had a 4.3 WAR over only 16 starts. Had he finished that year out at a similar level he would have been in contention for a Cy Young award. Having that Buchholz back would be massive for the Red Sox.
Posted by Dave at 8:22 AM

Small sample size with Sandoval and Ortiz. Red Sox will be just fine and in full swing come Memorial Day. Everyone still has rust to shake off in live games although they got plenty of reps in spring training.
And if Tanaka needed Tommy John Surgery, he would have had it by now.