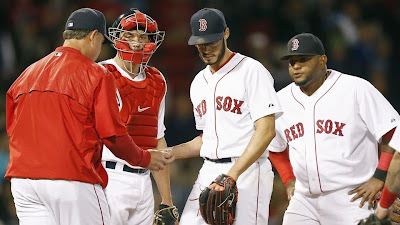 Meanwhile, Boston's defense is solidly in the top third of the league. So is their offense overall. So it is obvious that to turn things around, Boston has to figure out their pitching situation sooner than later.

The relative weakness of the AL East this year has allowed Boston to survive despite their poor pitching. But if New York's bullpen keeps performing as it has been and the rest of their team maintains their productivity, the window for Boston to turn it around in 2015 will close and close soon.

The Boston bullpen has not given the Sox nearly enough, though part of that can be explained by their overuse due to the starters not getting deep enough into games. Some of the big bullpen signings people thought would strengthen the pen (Robbie Ross, Alexi Ogando) have been disappointing. If management thought this bullpen was strong enough to cover for an average rotation (as New York has done quite successfully with Betances and Miller leading the way), they miscalculated and in grand fashion.

But as stated before, Boston's true problems lie in their rotation. Rick Porcello is 2-2 with a 5.34 ERA. In his defense, however, his last two starts have been solid and he almost cut his ERA by almost 1.5 runs in the process. If any pitcher looks to be turning a corner, it's Porcello.

And a nod must be given to Justin Masterson as well. Over his last three starts he has lowered his ERA by almost three runs. He should have gotten a win on Friday but Boston's offense failed to exploit a run-down CC Sabathia. He needs to be consistent as well going forward, not being dominant but good enough to give the Sox a chance to win in his games. If Porcello and Masterson can continue their performance, then Boston will have something of a foundation to build upon.

But it will be a shaky foundation thanks to the other three starters. Buchholz's inconsistency has been well-documented here. His last outing against the Blue Jays was atrocious. Wade Miley has gotten past the sixth inning exactly once, though to be fair he did pitch decently against the Yankees on Saturday. And Joe Kelly...for a guy who can hit 100 on the radar gun, he doesn't seem to know how to pitch. His ERA has risen in each of his five starts, from 1.29 to his current 5.72. He has surrendered five earned runs in each of his last three starts. But he has great stuff which makes him all the more frustrating. In my fever dreams I like to pretend that Kelly is like Nolan Ryan; great stuff, mediocre at first but after a few seasons somehow puts it all together.

All that said, there is also just some bad luck going on here. Boston's starters are not this historically bad over their careers. Sooner or later it evens out. And in a note for Yankee fans, that goes for you as well. Betances and Miller can't keep this up forever and neither can your offense. Regression to the mean, my friends. Math is a cruel mistress.

There is one other area to note: management. John Farrell has a reputation as a pitching guru. Ben Cherington went out and signed pitchers who have talent but haven't been able to harness it on a regular basis. Was the expectation that these pitchers would just improve this year, or was it that Farrell would somehow unlock their potential? Either way, it hasn't worked so far.

This is usually where people make suggestions on how the team could do better. But frankly, I don't know what Boston should do. I don't think a Cole Hamels trade is the tonic some suggest, especially when combined with the likely cost in talent. If you are going to surrender young talent, the best move is to look for slightly older talent on a similarly struggling team. Maybe someone like Jose Quintana on the White Sox. Because at least he knows what it is like to pitch in the AL.

I do know one thing, however; don't listen to sports radio today. I already had to listen to Glenn Ordway on WEEI tell me that Boston's rotation is all 4th and 5th starters. Which is bunk and the kind of hysteria that is all-too-common on the airwaves.

But Boston does need to find a solution and find it soon. Keep an eye out for Eduardo Rodriguez. He tore it up at Portland last year and is killing it in Pawtucket this year (3-0, 1.82 ERA, 11.00 K/BB ratio, 0.851 WHIP). If Miley continues to crash and burn or Kelly keeps seeing his ERA climb, Rodriguez could be the first high-end minor league starter to get a shot in Boston.
Posted by Dave at 8:30 AM