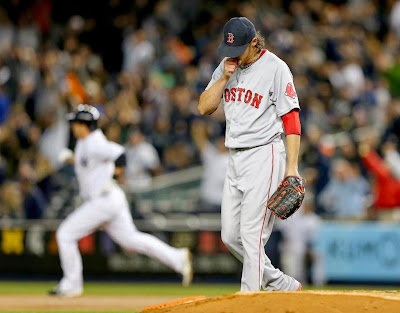 I think Travis Shaw should go into Spring Training 2016 as the starting first baseman in Boston and it should be his job to lose. He did enough to earn that chance. But it looks like the Sox are going to persist in trying to make Hanley Ramirez a first baseman. Which should end in a spectacular flame-out. That sadly makes Shaw somewhat redundant and, since he is young and controllable, valuable as a piece in a trade.

Marerro has the unfortunate circumstance of being a natural shortstop, despite putting in time at second and third last year. With that position locked down by Bogaerts, and a slew of younger infielders in-system for the Sox who could fill his position as a utility man, Marerro is a top-10 Boston prospect that they can afford to move.

Buchholz is either a transcendent pitcher or a disappointing one. There is no in-between with Clay, no extended period of consistency. Boston picked up his $13M option, making him a very tempting piece in a deal. He has talent to spare, and that should entice more than one team to make a run for him.

Kelly...he should be so much better than he is. The kid can hit triple digits with his fastball and has obvious talent. But he is less than the sum of his parts. But he did one very valuable thing for Boston; he finished the season with eight wins in nine starts. I am not going to blow smoke up your ass and say they were impressive wins. Not one had a Game Score of 65 or higher. But it was still eight wins in nine games. That, and the fact that he is 24, should allow Boston to use him in a deal.

These are the three top prospects in the Boston system and it would take a special player to even see one of these guys considered as possible trade material.

Moncada is the $31.5M Dollar Man who has a rare talent and could be a perpetual All-Star in the majors. The Red Sox will not trade him. Period.

Rafael Devers is the future third baseman for Boston. He has performed well at every level, has a good arm and insane bat power for a third baseman. I would be shocked if he doesn't get a call up to AA Portland next year, which would put him there at the tender age of 19.

Anderson Espinoza is the name you are least likely to recognize, but he may be the best prospect out of the three. He was good enough to play at Single A Greenville last year. He has an electric arm, with a fastball hitting 99 already. The buzz around Espinoza is getting louder and I would be shocked to see Dombrowski trade him.

Brian Johnson is a smart pitcher and busts his butt. But he is a back-end starter at best and at age 24, I don't know how much value he presents in a trade. Maybe as a final piece but I think that it limits the chances of him being moved.

Sam Travis is the best first baseman in the Boston system and that gives him some value to Boston. Whether that translates as value to other teams is questionable. His bat is what will likely determine his future and until that happens I think he just doesn't bring enough as a trade piece.

Trey Ball is one of three top-20 prospects in Boston whom also happen to be lefty starting pitchers. A young kid with a raw talent, he could be a 2 or 3 in the majors but that is at least two years away. Again, he could be a final trade piece but I don't see a team willing to roll the trade dice on him this early in his career.

Benintendi came out of nowhere in his sophomore year at Arkansas and parlayed an amazing year there into a $3.5M signing bonus and being Boston's first round pick in 2015. He has power and speed. But he plays center field so that does make his future in Boston a little more clouded, as outfielders is one thing the Sox have plenty of at the moment. I think it unlikely he could be traded but not impossible. The buzz surrounding him on draft day will have him in the minds of other teams if Boston comes to make a deal.

Margot is an exciting young player. Good bat with some pop, fast on the bases (38 steals in Portland last year) and a very good defensive outfielder.

It's the last word in that previous paragraph that makes him a valuable trade chip. With Betts, Castillo, Bradley, Cecchini, Benintendi and others, the outfield is very crowded now and in the future. Margot is, to be blunt, expendable. I do recognize that you could swap Margot and Benintendi. They are that close in the minds of a lot of people. But Margot could be the linchpin in any deal.

Henry Owens is a potential 2-3 starter in an organization full of 2s and 3s. And I don't mean that as an insult. But Boston needs a front-line starter and Owens is the best pitching prospect they have to offer in a deal. He held his own in the majors last year and is only 23. That will make him a very attractive trading chip.

Javier Guerra is a name most people probably don't recognize. He is down in single-A right now and is the best SS prospect in Boston's system. He is definitely a defense-first shortstop, but that defense is very good. He would be a piece of a larger deal, but that would be much more likely if Dombrowski decides to hold onto Marrero.

So in looking at these two groups, here is the list of Boston players I feel are most likely to move in any deals this off-season:

And Jackie Bradley, Jr. should be a conditional member of this group since the temptation to cash in on his excellent finish in 2015 must be great. But as is, that group includes three of Boston's top 10 prospects. If Boston made the core of any deal for a top starter a grouping of Margot, Marrero and Owens/Kelly/Buchholz I think they'd be on to something. They could also try to pair some of these players with Sandoval if Boston is intent on moving him along with free agent Alex Gordon being a possible target.

Regardless, it is going to be a very interesting, exciting and controversial off-season for Boston and their fans.

* After writing this I read a post where someone made a convincing argument that Betts was expendable because of Bradley's emergence and the sheer value that he has on the trade market. I am not sure I agree with that as a reason to move someone who gave you 6.0 WAR last year, but you have to acknowledge the possibility.
Posted by Dave at 9:23 AM