So the big new yesterday was the Yankees signing Masahiro Tanaka for $155M over seven years, with an opt-out after the fourth year. It's ridiculous money, the kind of deal that puts paid to any talk coming out of New York about fiscal responsibility and staying under the tax cap.

It's also the kind of deal that the Yankees were forced to make. And one the Sox didn't have to make, which is why they never got past the early stages of pursuing Tanaka.

As Aviv pointed out yesterday, the Yankees' "barren farm system" forced their hand on this deal. With too many holes and question marks in their rotation, and an institutional inability to actually take a year (or two) to rebuild, what else were they going to do? The Yankees are locked into a kind of death spiral, where their poor farm system forces them to spend big money on free agents, which (like Ellsbury) cost them draft picks or takes up money they could use in other areas. Which then limits their farm system and repeat forever. 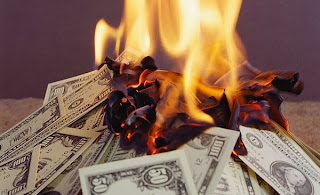 Another meeting of the Yankees' financial department gets underway


To that point, MLB is about to release their list of the top 100 prospects in baseball. They have been releasing top 10 lists at each position over the past week or so to get people ready for it. Of course, at Sox vs. Stripes we only care about the Red Sox and Yankees on the list because the other 28 teams are an afterthought.

But in truth, this is really about the Boston prospects. As you'll see, these lists are yet another example of what building a farm system provides a team, as opposed to throwing away draft picks and spending ridiculous amounts of money on free agents.

So by position, here are the Boston and/or New York prospects with their rank at that position

You can see the difference between the two teams quite clearly. Boston has a top 10 prospect in seven of the eight positions. New York has them in only two. And those two position are among the "weakest" when it comes to quality and depth prospect-wise across the league.

Even at RHP, the one position where neither team had a top 10 prospect, the Sox have two high-level arms in Anthony Ranaudo and Matt Barnes. Sox fans could see one or both pitchers in Boston before the end of the year. 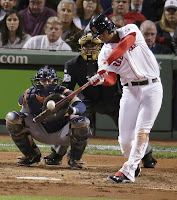 It's also worth pointing out that two of Boston prospects already made the senior squad and earned a ring last year. Both Bogaerts and Bradley will be with the team come April, which is another sign of the strength of the Boston farm system. And don't forget Allen Webster* and Brandon Workman, two more prospects who aren't in the top 10 lists but were solid contributors last year in Boston's championship run.

All of this is a long way of getting around to a central point; Boston didn't try to sign Tanaka to a big deal because they didn't have to do it. They have a cadre of high-end, talented arms ready to come to Fenway over the next couple of years. And it makes more sense to keep $155M in-house to extend deals on other players you already have or to craft incentive-laden deals for short-term free agents** than to blow it on one free agent who may be awesome or may be an awesome bust.

I've said it before and I'll say it again; the Yankee way of doing business is going the way of the dinosaurs. With the new rules surrounding the draft and international free agents, and the tax on the cap, no team can continuously neglect their farm system anymore. But the Yankees seem hell-bent on doing just that. Well, more power to them.

Now, would I have been sad to see Tanaka come to Boston? Of course not. I could see a scenario where the Sox could trade either Lackey, Dempster or Peavy to open a slot. The monetary impact this year would have been average (for example, a roughly $7M gap between Lackey and what Tanaka is earning this year). But it could have blocked an in-house arm from moving up or made negotiations with Lester more difficult. Tanaka would have been a "nice to have" player for Boston. And paying $22M a year for "nice to have" is a little too steep.

It's a great place to be as an organization, especially when it is combined with deep pockets. You'd think the Yankees would want to be in the same situation.

* Webster came over from the Dodgers in the Great Salary Dump of 2012. A move which garnered the Sox good prospects and freed up plenty of money to make smart decisions in 2013 while retaining flexibility to extend other players if needed. Sometimes you have to take a step back to take all those steps to the World Series title the next year. But hey, as long as the Yankees win the off-season I guess they're happy.