Going into Spring Training for the Red Sox, most people were watching the left side of the infield as the place where we could see position battles. Instead, with Middlebrooks stroking the ball and Stephen Drew foolishly turning down his one-year qualifying offer the positions settled in. Boston may be a bit thin over there but Middlebrooks and Bogaerts are going to be the starters.

Where there wasn't expected to be a lot of competition was in center field. With the departure of Jacoby Ellsbury to the money-laden (if victory-bereft) confines of the Bronx, most people expected Jackie Bradley, Jr. to step in. What no one saw coming was a reclamation project by the name of Grady Sizemore making a solid case to be the starter. While Sizemore played solidly all spring, Bradley struggled at the plate. 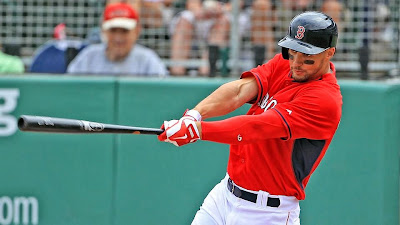 
Just 10 days ago when looking at this battle for center, I said the following:

The most logical choice (and as a Bradley fan, I can't believe I am saying this) is to start Sizemore. Provided that his production continues over the rest of Spring Training and he can handle the physical demands. The simple truth is that Bradley has two options remaining and the Sox can send him down to start 2014 with no risk. If Sizemore gets hurt or wears down (which is likely) Bradley can come right back up. If someone else falters, Bradley will be called right back up.

Releasing Sizemore or trading him away when he is playing this well wouldn't make any sense from an organizational standpoint. If he gets hurt or tired, that is when Bradley can come back and slot into center. It's all about depth in Boston, and starting Sizemore preserves that depth in the outfield. And at a very reasonable price.

But Sizemore, who has undergone seven surgeries since 2009 and had not played in a game at any level the last two seasons, has passed all physical tests this spring and showed few ill effects from his long layoff, batting .333 with a home run.

Sizemore was simply the better player all spring training. It wasn't even a close call at the end. Forget the batting average and the home runs since those stats are way over-rated. All you need to know is at the plate Sizemore had an .843 OPS and Bradley posted a .476 OPS. Any difference in their glovework or defense was never going to bridge that gap.

Frankly, this is probably the best scenario for Boston. Bradley need reps to regain his 2013 form and he'll get those in Pawtucket. And with Sizemore looking solid, there won't be a lot of pressure on Bradley to hurry back to Boston so he can work in relative peace.

And in Boston, the feel-good story of the season so far continues. Sizemore could be the deal of the season if he can continue to play like this. Oh, and Ellsbury's OPS so far? A mediocre .712, to go along with a right calf injury that has kept him out for two weeks. How much did he cost the Steinbrenner clan again?
Posted by Dave at 3:33 PM