Tim Hudson in Boston? It makes no sense.

So there is a persistent rumor that the Red Sox are interested in Atlanta pitcher Tim Hudson to bolster the pitching rotation.

On it's face, it sounds intriguing. After all, Hudson has won over 200 games in his 15-year career. He has never had a losing season as a pitcher (the closest he ever got was going 13-12 in 2006). He has averaged 188 innings per season. His career ERA+ is 124 and he has averaged 3.7 WAR per season. Those are impressive numbers. 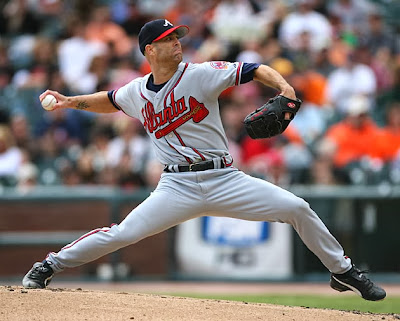 But go back to those last three words in the second sentence: "15-year career".

Tim Hudson is 37 years old. And the pitcher he is now isn't the same pitcher he used to be.

A is Tim Hudson. B is Felix Doubront. C is Ryan Dempster. I included those two pitchers for a reason. That simply being that if Hudson were to come to Boston, he'd replace one of these two guys. Because the Lester/Lackey/Buchholz triumvirate is going nowhere and Peavy was good enough to keep under contract for another year.

Signing Hudson to replace Doubront makes absolutely no sense. While Hudson does have a better ERA and WHIP, they are roughly the same pitcher at this point in their respective careers. Except Doubront is trending up and Hudson is moving down. Doubront is also under Boston's control until 2018. And that matters. A lot.

What also matters is money. Doubront isn't arbitration-eligible until 2015. He made a little over $500K last year. Tim Hudson is a free-agent who made $9M last year. He'd likely command a similar number in 2014. That money could be used by the Sox to extend other players or bring in a mid-tier free agent to solidify another position.

Replacing Doubront (25 years old) with Hudson (37) would be a huge mistake. It would be signing a player because of his name, a Carl Crawford kind of signing. His performance last year and the money he would want relative to Doubront should make that obvious.

But what about Dempster? He is 35, not too far off from Hudson. Hudson's numbers were better in almost every category. And unlike Doubront, Dempster would cost Boston more than Hudson. Dempster is on the books next year for $13.25M.

Well, two things argue against this happening. First is that one stat where Dempster was much better than Hudson: innings pitched. Dempster threw 40 more innings than Hudson last season and started eight more games. That matters: you need to get innings from your starters - even if those innings aren't great - so your bullpen is functional for the full season. And the Sox need their bullpen running like it did towards the end of 2013.

And yes, I get that Hudson was injured last year. But that doesn't change the fact that there has been a slow decline in Hudson's numbers over the past three seasons. And there is no evidence to suggest that it would have been any different if he had finished out the 2013 season. Heck, I'd argue that an ankle injury to a 37-year-old pitcher makes it an even worse idea to sign him.

And the second is the money. Is there a team out there actually willing to pay over $13M for a year of Dempster? And why would they if the guy Boston wants - Hudson - is actually out there for likely less money? They should just go straight after Hudson, stats be damned.

But besides that is the simple fact that Hudson has been in a slow decline over the past three seasons. Every year since 2010, the following stats have gotten worse year-over-year for Hudson:

And many others would have worsened year-over-year but for a slight blip in 2012. But the evidence is pretty clear. Hudson is a good pitcher - heck, a very, very good pitcher - who is simply getting old. And for Boston to commit anywhere between 6-10M for a year of Hudson at the possible expense of losing a young pitcher like Doubront just doesn't make sense.
Posted by Dave at 2:49 PM