Five things to watch in Spring Training for the Sox

So the trucks arrived in Florida and 2014 Spring Training has begun for Boston. While we deal with all this snow up here they have to avoid injuries and sunburn. Coming off of a championship season with that squad mostly intact, the Sox haven't had to do a lot of trading or signing to bolster the roster. But here are five things to keep an eye on as we head towards Opening Day.

1. What will happen at third base? The Red Sox are all about depth, ensuring that they have backups at every position to ensure that an injury or a bad run of play doesn't put them in a hole. But third base has emerged as a red flag. 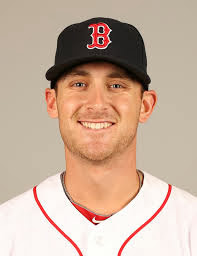 Will Middlebrooks has a lot of potential. But he took a step back last year. And it was big enough that he was benched in the post-season. He saw large drops in his on base percentage and OPS. His strikeouts increased by over a third. And while his glove was roughly the same, he went from a 1.2 WAR in 2012 to a -.1 in 2013. Not what you want to see in a sophomore season.

If the Sox sign Stephen Drew (and that is still a big "if") and Middlebrooks can't get it done, then the Sox can slide Bogaerts to third. They'll still be thin but the positions will be covered. But, if the Sox don't sign Drew and Middlebrooks doesn't turn it around...the Sox are in trouble.

They don't have anyone behind Bogaerts on the depth chart currently. If they slide him to third then shortstop is totally empty. And if he stays at short then the Sox have to go with Middlebrooks at third until and unless they sign someone else. Yes, Garin Cecchini is in the wings and looks to be a solid 3B prospect but he still has at least a year to go. And they do have Brock Holt but he is a utility-level player, not a starter.

Boston needs Middlebrooks to step up and be the player he can be. He has the tools and the talent. He just has to get his head straight and put it all together.

2. Who will start in center field? A large contingent of Boston fans (and I am one of them) want to see Jackie Bradley, Jr. starting in center field. But with the one-year signing of Grady Sizemore, things could get interesting in Ellsbury's old grounds.

Is Grady Sizemore healthy? That is the single biggest question. Because if he is and he can play to even 80% of his old level, you would be really hard-pressed to have him on the bench. But that is a really big ask of someone who hasn't played a competitive game in two years. Unless you get that kind of production from Sizemore, it would be crazy to not give JBJ the chance to be the starting center fielder. If he starts and you can even get 60% of the 2005-2008 Sizemore as a super-sub, Boston will be in great shape in the outfield.

3. How will the new catcher work out? Pierzynski is the kind of player you love to hate when he is on any other team but yours. Kind of like Brad Marchand with the Bruins. I have no concerns about him as a player or with the bat. He should at least provide the same level of production as Salty did last year. The question is how will the pitching staff respond to him? Will he have the same kind of communication with the staff as Salty did. If that happens then it'll be smooth sailing. But it can take time to build that kind of communication. If there are clashes and misunderstandings between A.J. and the pitchers that could lead to some problems during the season.

4. How does Papi look? David Ortiz is the offensive engine of this team. That is both a good thing and something to give Boston pause. Good because Ortiz shows no signs of slowing up. He plays at a position that limits wear and tear on a player. And he ranked in the top 10 in multiple offensive categories last year (walks, total bases, OPS, runs created).

The other side of that coin is that Ortiz is closer to 40 than 30. He is reaching the age when most players begin to see a sharp decline in their stats. Not all players (Frank Thomas had an MVP caliber season at age 38, Edgar Martinez had an .895 OPS at age 40) but most. The Sox are incredibly dependent upon Papi when it comes to production. Should age catch up with him or he gets an injury...it will have major repercussions across the Boston lineup.

And add in the contract talks. Ortiz wants an extension and Boston doesn't want to jump right in. How will that affect Ortiz mentally? How Ortiz enters spring training and acts during it will give Boston fans a good idea of what to expect from him in 2014. 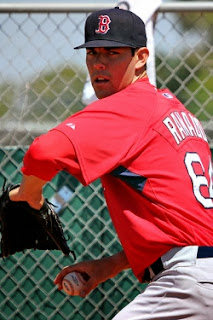 5. Starting Pitching Depth. The Sox, for once, have a ridiculous amount of starting pitching depth. Even if they (God forbid) lose a starter or two, they have enough ready arms in the system to plug the gaps. Anthony Ranaudo (pictured), Allen Webster and Matt Barnes (go UConn!) are all in Pawtucket. All of them have the ability to come up and pitch if the necessity arises. I would go so far as to say that if Ranaudo has a solid spring training there would be an outside chance he starts in Boston if the Sox had to trade a veteran pitcher to fill a position gap (like third, for example).

Boston has the most pitching depth in-system right now since 2007. That year Boston had Lester, Buchholz and Justin Masterson in their system along with Beckett, Wakefield, Schilling and an effective Matsuzaka in the starting rotation. It is no surprise they were able to lean on their pitching en route to the 2007 World Series title. I'm not saying the Sox will repeat in 2014. But if they want to, depth in pitching is where that all begins.
Posted by Dave at 1:14 PM